High performance – the team that plays together, plays better together 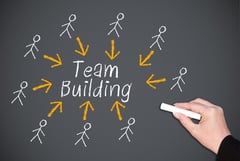 In the nine years since I became a parent I’ve spent a lot of time observing how little people interact. The interesting thing I’ve noticed is that you can learn a lot about human behaviour by watching your kids!

I have always been a bit skeptical about the impact of team building exercises – you know the 'take the team out to the woods and get them to build a bridge' type of stuff. However a recent trip away with my eldest son’s rugby team caused me to rethink this skeptical approach.

We took a team of 30 under 9’s away for the weekend. The first part of the weekend was spent playing together in an adventure centre – they did some archery, rock climbing and bit of orienteering. All good stuff.

Then we took the kids to Thomond Park to see the Munster rubgy team play Connaught. Bear in mind that this was about a week after Ireland won the 6 nations – so to see many of their 6 nations heros live on the pitch was a big thrill for the kids.

So that was day one. Some playing and a look at how the professionals play the game.

The interesting piece happened on day two. Our boys took to the pitch early on a windy and freezing cold Sunday morning to play their hosts. But what happened on that pitch took me completely by surprise. Up till now we’ve had a group of individuals running around after a ball – sometimes winning, something not.

This match however was totally different. They won which was great. But what was really interesting was the impact of the previous day’s activities. For the first time ever, our boys played like a real team. They communicated, worked together and ultimately delivered the results.

So maybe having watched how the kids do it I might just have to change my mind about the value of team building exercises. Maybe, just maybe, it is the case that the team that plays together, plays better together.